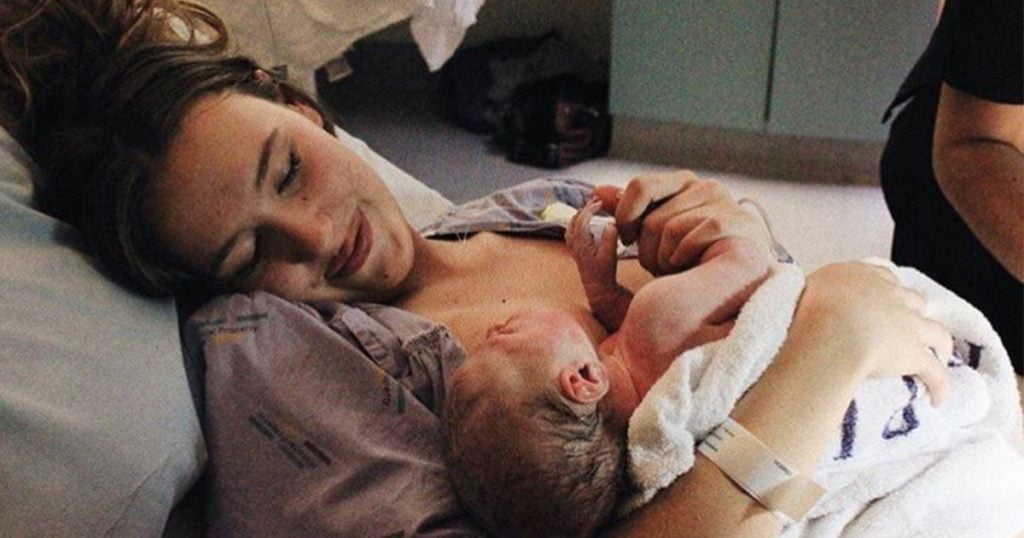 Nearly two weeks had passed since my due date, and at this point it felt like I had been pregnant for 100 years and was quite possibly going to continue to be pregnant for the rest of my life. With over two weeks of consistent raspberry leaf tea drinking, Swiss ball bopping, and curry eating, I was convinced that this baby was never going to come out. And then (thankfully) it happened: I woke up at 1:15am on a Thursday to first belt of contractions. Oh, the joy! I never knew such pain could bring such happiness; it was the promise that we were going to meet our baby girl!

The feeling of contractions cannot be compared to any other pain. It is an intense tightening and releasing, and by 5am, the intensity had become so great that my partner Callum packed the car and we were off to the hospital. During the 40-minute car ride, my contractions seemed to dim, which was nice, but I also had the anxiety that this was a fraudulent start to labour and that my body was tricking me. I worried that my midwife was going to have to send us home with no baby… Oh, the panic! Luckily (kind of), they returned full force as we arrived to the hospital.

When we got into the room, I got ready to get into the birthing pool. My initial hope was to have a water birth, but I also wanted to have no expectations and demands, which would allow me to be calm and open to any changes that could potentially happen. The relief of the water was miraculous; it was truly healing and created such a calming energy for me. This lasted for about an hour until the midwife kindly offered me some gas, which took the edge off quite nicely when taken in large quantities. Callum wasn’t shy about having a dose, either, as he sat on the edge of the bath.

The room dark and quiet, filled with deep, long breaths, concentrating on feeling every contraction as it came through and breathing it out as it passed. What felt like 25 minutes thanks to the magic of entonox was in fact about three hours. Unfortunately I had only dilated a further two centimetres, and the contractions were not getting any prettier. This is when my midwife (the kindest woman on the Earth at this point) suggested that I perhaps consider having Syntocinon to help this baby come in the following hours instead of perhaps that evening. It was a big YES from me! Syntocinon helped my contractions to come longer and closer together at a faster rate. To help cope with the fast wave of larger contractions, I was offered an epidural, which once again received the biggest YES in the history of yeses.

After about an hour of everything sinking in, I was 10cm and ready to push. With Callum on one side, the midwife on the other, and the student nurse holding the Go Pro in the middle (poor thing), it really was time get the show on the road.

Thanks to the epidural, instead of a scorching burning pain – which is what I expected it to feel like – it was more like there was a heavy pressure pushing on my bottom, almost like taking a big poo, with a far more beautiful reward! Even though I physically know it was all of my doing, Callum was my theoretical epidural. He kept me calm, strong, and positive during the times I felt the most vulnerable. I could not have done it without him.

I started pushing at 12 noon, and at 1:19pm on the dot, with one last hurrah, out came our beautiful Azura Riverlilly. She was placed on my chest, and all of the pain, sweat, blood, and tears were forgotten in an instant. I was holding MY baby, and then everything completely shifted in a way I didn’t know was possible.

I still have not been able to find the words to describe those moments after she was born. They were filled with a bright luminosity and such a softened sacredness; the world was suddenly inundated with the purest form of magic. In those few moments, I understood everything and nothing. She was here, and we were complete.

“You brought a wild beauty to this world; sacred and intense, a love made from the stars.” – Celeste

This silly season, think and act like a baby 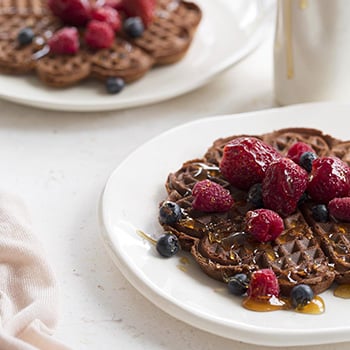 Waffles have become a staple in the Unbakery cafés for our weekend breakfast crowds – this is a chocolate version of my favourite gingerbread waffle recipe... READ MORE