Dancing with my baby

I had always been a little scared of the whole idea of giving birth. When I had my birth plan appointment with my midwife, I decided I would try and go drug-free at a non-surgical birthing unit, but I made it clear that I wasn’t worried about how baby came into the world as long as we were both healthy.

My contractions started during the day on a Sunday; we timed them and it took a while for them to become regular and long enough to contact my midwife. It was late at night when we advised my midwife I was in labour. She came for a home visit, did an internal exam, and said to keep doing what I was doing. We made our way to the birthing unit at about midnight that night.

At the birthing unit, I jumped in the pool, but my contractions slowed down. So instead, I paced the corridors. After a number of hours walking up and down the hallways, my midwife suggested breaking my waters, which I consented to. Unfortunately, that didn’t do much, and at about 6am it was suggested I transfer to hospital.

The ambulance came and off I went, my husband following behind the ambulance in the car. I was so grateful to get off that damn stretcher when we arrived at hospital! No sooner had I got on the bed in the labour ward than I was getting an epidural. I meet the surgeons rostered on, and soon thereafter I fell asleep. My midwife also had to leave to get some sleep. At no point during this experience was I scared; I was in my own little world.

At about 2pm, I was awakened and told it was time to push. I pushed for what felt like five minutes, and then all of a sudden lots of other people started coming into the room and feeling around “down below”. I was told the baby was brow-facing and was not coming out. Two surgeons arrived and told me that they would prep me for surgery. The lead surgeon would try to help my baby come out by using the ventouse, but if that didn’t work he said they would “go in”.

It was then that I started to cry. My husband also began to get a little teary-eyed, which didn’t help me. The backup midwife said she was sorry I couldn’t give birth vaginally, but I replied, “It’s not that – it’s just I’m scared!”

My belly was shaved and my epidural increased and tested with ice packs. Then I was wheeled into a room with huge overhead lights. I was poked and prodded, and by this stage my arms were shaking uncontrollably. The surgeon said the baby was still stuck and that he could pull a little harder, but he really didn’t want to. I said that was fine, so they put sheets up so I couldn’t see what was going on, and they started to perform a C-section.

Pain started to radiate from my tummy, so I complained to the anaesthetist, who asked where it hurt and put a mask over my face, telling me to breathe deeply. They gave me morphine, and the room started to go black. It was very odd – I could only hear one person speaking at a time, and someone was talking about going fishing!

I told myself to listen for my husband’s voice, and at one point I heard someone ask him if he wanted to cut the baby’s cord. The baby was then handed to my husband, and I could hear him talking to the baby. I told myself to wake up, and I managed to open my eyes just long enough to kiss my baby before I passed out again.

I learned later that I had lost about a litre of blood during the birth. In recovery, I could feel the baby latched on to my breast, but I was very sleepy. When I woke later on, I was given the best lemonade ice block I’ve ever had in my life! I briefly saw my mum and my sister, and went back to sleep.

The next morning I tried to get up to get the baby, but couldn’t get very far from the bed as I had a catheter. Unfortunately, coming down from all the drugs I’d been given during labour and birth was horrible. While my husband and daughter had bonded really well and had skin-to-skin contact, I struggled to get my milk supply through, and was not getting much sleep.

After a few days, I was transferred back to the birthing unit I’d come from. The staff there were amazing and happy to let me cry on their shoulders when I needed to. In a week, I was allowed to go home. I had bad baby blues, and struggled with the fact I couldn’t remember much of the birth or the immediate aftermath.

I felt like I didn’t know what to do with my baby, and I struggled with breastfeeding. But talking to my family, close friends, antenatal group, and dancing with my baby got me through!

My husband saved my life, helping with nappy changes and nighttime awakenings, helping me piece together the story of my labour and birth, and providing a non-judgemental shoulder to cry on.

I have to admit, I hate my birth story, but it is real and it’s my journey. I also think to myself that a long time ago, both myself and my baby would not have survived the complications of my baby’s birth. I count my blessings and I’m so grateful nothing was wrong with my baby daughter. We bonded a little bit every day, and when she was about four months of age, we were where we should have been. 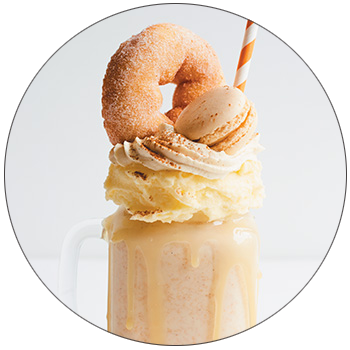 Like a taste of Halloween - this shake is frighteningly good!... READ MORE

In the quiet of the night, the only two people awake are my baby and me... READ MORE