The path that leads to a particular condition is critical to understand so the road out can be paved. It is vitally important to work out when the symptoms began and what may have changed around that time. If a baby is being solely breastfed and eczema begins, for example, what Mum is eating and drinking needs to be explored, as something may be coming through her milk that the child is unable to digest. Another scenario might be if a child has been symptom-free while on breast or bottle milk, and solid food is introduced, then the child may be reacting to a component in one of the new foods. I also believe that in time, science will begin to demonstrate that certain gut symptoms, such as bowel compaction, will be found to have an ‘allergic’ component.

Having done part of my PhD work with children with autism (and an aspect of that PhD being in the field of immunology) and having worked alongside one of Australia’s most prominent allergy specialists, as well as having worked with patients of my own for the past 15 years, I have witnessed first hand the miracle that dietary change can be for an allergic child. I would typically suggest a four week trial without ONE particular food or food component. If we take out many and the child’s symptoms disappear, we don’t know what has done it. It is important to remember that when it comes to eczema, red means recent. In other words, if the eczema is bright red and flared up, there has been a recent exposure to the culprit food/s. Dietary change – to determine if a food is the basis of the symptom/s you want to resolve for a child – may involve dietary change for the breastfeeding mother, a change in the type of protein being given in formula, or for a child eating solids. Or all three. Any trial must be super-strict. Not a drop of the food being trialled can be consumed during the trial, so all labels must be read. All dietary trials are best done under the supervision of a qualified health professional. The most common foods I have seen (the omission of) make a significant difference to allergic symptoms are:

Any trial is best done as just that: a trial. If it resolves the symptoms or if there are significant improvements after the four week trial, the dietary change is best continued for a six or 12 month period and then reintroduced to see if the gut and/or immune system have matured and the food is now tolerated. Bear in mind that symptoms may appear to resolve but can simply reappear as something else. For example, there is some concern that unresolved eczema shifts to present as asthma. If omitting a particular food does not resolve the symptoms, it is obviously unnecessary to continue avoiding it. If a mother or child needs to avoid a food or group of foods in the long term, then a health professional should help guide you about ways of including key nutrients into the diet.

It is important to remember that when a baby is born, the gut (digestive system) is immature and the cells that line the digestive system have gaps between them. This is why we can’t feed all foods to newborns as it takes between two to five years for the gut to mature and no longer be ‘leaky’. Exclusive breastfeeding for at least six months is the best way to nourish a baby, particularly those most at risk for developing food sensitivities.

In addition to dietary change, a baby or child with eczema is likely to be deficient in an enzyme critical for the body to be able to incorporate fat into their skin. This enzyme is called delta-6- desaturase. It is found in evening primrose oil. I will often suggest to a client with a baby with eczema to snip open three evening primrose oil capsules over the course of the day and apply the oil to her nipples so bub can suckle it off while feeding. If the child is eating solid food, 3 grams a day of evening primrose oil can be added to foods such as mashed vegies.

* Dr Libby Weaver (BHSc (N&D) (Hons) PhD) is Australasia’s superstar of all things health and nutrition, combining many years of experience, learning and clinical practice to her holistic approach to health. Dr Libby travels the world speaking at conventions and workshops as a keynote speaker and expert on weight loss, nutrition, hormones, emotions and total wellbeing. For more information and Real Food ideas, visit www.drlibby.com

Please note, this article is not referring to IgE-mediated allergy which is a reaction of the immune system to protein components of a food such as casein from dairy products, eggs, wheat, soy, peanuts, tree nuts, shellfish, and/or fish. This information is intended as education, not medical or nutritional advice.

More On Breastfeeding From BUMP&baby:

The Safety Do’s And Don’ts For Breastfeeding

All Your Expressing Questions Answered

The Babymoon is your chance to connect with your baby in those first few weeks and months. Here are some suggestions for prioritising that special time... READ MORE 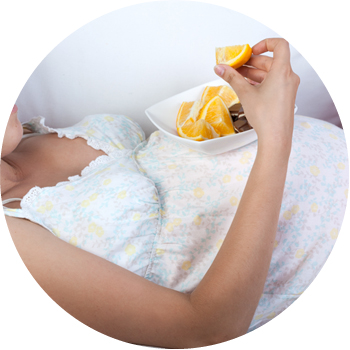 Good nutrition is vital during both pregnancy and breastfeeding. Here, we run through some of the main dietary things you need to know... READ MORE