Here I was, strangely serene, lying in bed on this beautiful Monday morning having had intermittent contractions for the past few hours. I’d sworn off having babies after number three was born at a whopping 10’4” and I nearly bled out. Never again, I said.

My due date had been and gone; I’d waited all weekend for the contractions to start but babies never arrive when you expect them to.

Since this was my fourth (and last!) baby, I decided I wanted to experience a home birth. I’ve always maintained that the absolute worst part of labour is the car ride to the hospital. When pregnant with baby number two, we were living in the sticks of the South Island, over an hour’s drive from the nearest hospital. The drive to the hospital in full-blown labour was the most excruciating hour of my life, and I came close to having the baby on the footpath outside the hospital.

However, halfway through my pregnancy it became apparent that I would have to change my birth plan. My midwife Irene referred me to a specialist who said my baby was likely to weigh eleven pounds (not my fav person, obviously). It therefore wasn’t safe to have him at home, especially considering I have Thrombocytopenia (a low blood platelet count, meaning my blood has difficulty clotting).

So I’d spent the last few months trying to be positive about a hospital birth, and telling myself that the safety of my child (and myself) were paramount.

I woke my husband Martin up around 5am to tell him the baby was on its way. We tried to carry on resting for a while. At around 7am, he called my mum to come and collect the other children. He also called Irene, who encouraged me to get dressed and think about making my way to the hospital.

At this stage, my contractions were still a good five minutes apart and the pain was just like intense period cramps. I stayed in bed for another hour or so, with a hot water bottle pressed to my stomach, feeling nervous to be going through this again but so excited to be finally meeting my baby.

Martin eventually coaxed me out of bed and we made our way to Middlemore Hospital without any drama. I only had two contractions along the way! As soon as we got there, Irene checked the baby’s progress and attached me to an IV (with antibiotics for strep B). As it was only about 9am and the contractions were still reasonably irregular, she encouraged me to walk the halls of the hospital (drip in tow) to get things moving. I heard a woman screaming as she pushed her baby out and then heard her baby cry. I felt so envious in that moment that it was all over for her, and she had her baby in her arms.

Martin and I walked the halls for a good hour until the contractions got closer. Back in the room, Martin pulled up a chair and sat down. He knew from experience that it would be a long, boring wait, as we’d learned that I didn’t like to be touched during my labours.

As things seemed to be progressing a bit slowly, Irene broke my waters. This was way more uncomfortable than I’d imagined! But I had other worries. The baby was posterior, so each contraction now brought excruciating back pain with it. Irene would pull my hips apart to try and encourage baby to turn, and Martin would push on my lower back to ease the pain. So much for hands-off! These things helped but they would both say afterwards that they felt like they ran a marathon with me – pushing and pulling every few minutes for several hours. Irene also injected water into my back to try and cushion the pain, but it didn’t help. I refused gas and other pain relief as I knew from my first birth that the gas made me feel spaced out and out of control.

Eventually Irene told me I would have to push during the contractions so that the baby could have a chance to turn. I was too embarrassed as I really needed to poo! Eventually though, Martin helped me to the toilet and gave me some privacy. I really regret not pushing sooner … it turns out the baby was just waiting for some space and as soon as he had turned, it was time to push and he was out in under 15 minutes (arriving about 1.45pm). Thanks to the back pain, it was my hardest birth, but I stayed positive throughout, stuck to my guns with the pain relief and felt brilliant. I’d pushed out a 10”11’ baby without tearing!

I am so thankful for an incredible midwife to help me through the process. I felt safe and respected, and was able to go through with my (adjusted) birth plan. Middlemore ended up being a lovely place to give birth, though I chose to go home straight afterward.

And yes, Martin got a vasectomy a few weeks later!

CORINA ELDERSHAW IS A MUM TO FOUR CHILDREN (GISELLE, 9, LUCAS, 8, JONAH, 5 & EZRA, 2) WHO LIVES IN MANUREWA, AUCKLAND. CORINA WORKS PART–TIME FOR A LOCAL COMPANY MAKING BLISS BALLS. SHE LOVES TO BAKE, EAT SAID BAKING AND THEN GO TO BOOT CAMP. CORRECTING TERRIBLE GRAMMAR IS ONE OF HER FAVOURITE PASTIMES, FOLLOWED CLOSELY BY WATCHING HER CHILDREN SLEEP. 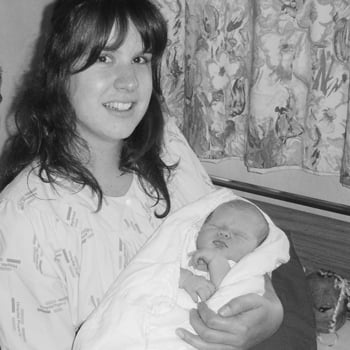 When my husband Martin and I first started dating, I told him in no uncertain terms that I didn’t want children. I was so afraid of the pain of childbirth As the weather heats up, salads return to our diets, and this one is perfect for during pregnancy.